If you scroll down you will find a blog about what I have been working on recently.

Up above is a link to my portfolio.

The Barrow Group’s The Temperamentals

Importance of Being Earnest 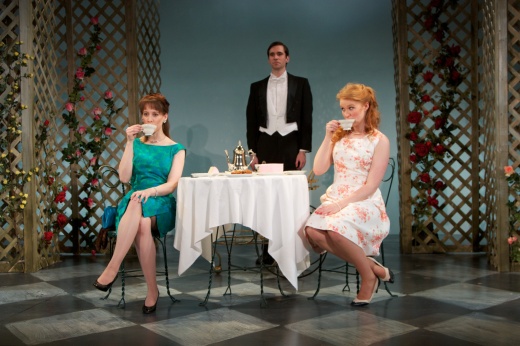 In April, I designed the set for The Importance of Being Earnest, produced by Quintessence Theatre Group in Philadelphia. I was immersed in my own designing, and so the stills here are more of a piece in progress than meant for publication, but I thought I would share them anyway.

I am proud to announce that a photograph I took for The Temperamentals has been featured in the new published script!

Thomas Jay Ryan and Michael Urie in The Tempermentals, by Jon Marans.

Not only that, but the artist who designed the cover used the same photograph as inspiration for his cover art.

If you don’t want to buy the script, you can still see the cover via the Amazon link above, and if you click on the preview, you can even see my photograph, along with my credit! (Yes, I made it into the preview!)

It seems that I completely forgot to post about the second Sticky performance that I shot in December.

A reminder: Sticky is a series of one act plays produced and performed about once a month at the Bowery Poetry Club. There is a sense of immediacy to the performances, and rightly so, as there is no tech or dress rehearsal. The single performance is it – take it or leave it. The whole thing is very appealing in a bar setting, pulling the audience in and making them feel part of the performances. It is very personal.

For my second shoot, I was asked to include more of the audience in the shots so as to give a better sense of what the performance is like.

Set Designer Andromache Chalfant recently asked me to photograph her set for the play Edgewise at Walkerspace. The play takes place in a fast food place during some sort of apocalypse.

Walkerspace is long and shallow. Andromache’s set displays a cross section of the restaurant, with a front door, eating area, kitchen, back room and alleyway. Since the audience never sees the set completely straight on – there is always some sort of neck straining to see, no matter where you sit – I felt the photos should reflect that as well.

The set has some wonderful details, and each area has a very distinct feeling. 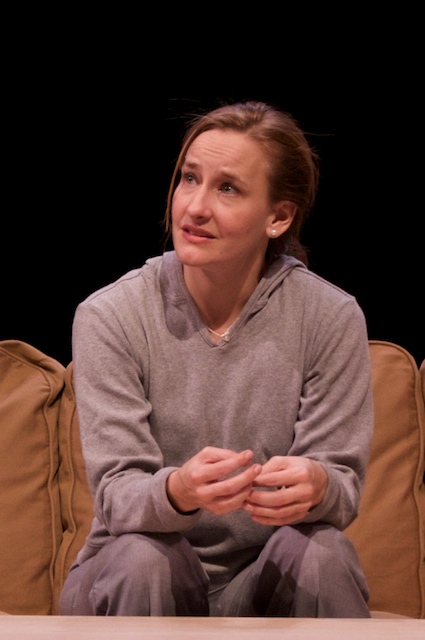 These are some pictures I took of Good Egg, the most recent play produced by Red Fern Theatre Company.

I was recently asked to photograph Sticky, a 10-minute play series that is performed in a bar.

There is no dress rehearsal or tech; someone points a spot light at the action (which takes place throughout the bar) and that’s about it. Blue Box Productions produces the series, which has one performance every month or so. 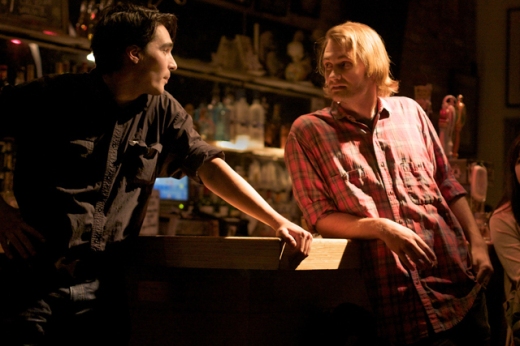 I’d never been to Sticky before, but shooting a live show with little light was less difficult than I’d anticipated. I used a wide-angle lens with a very low f-stop, which enabled me to use a faster shutter speed. The single spot light made for some very dramatic shadows. The most challenging part of the shoot seemed to be maneuvering around the audience without blocking views or distracting people.

When I started this business, I briefly considered doing publicity shots along with production shots. Publicity or press shots are done often before rehearsal starts, and are used in press releases and advertising.  They are often taken in a rehearsal studio, or perhaps in someone’s apartment or out of doors, depending on the company and what is available to them. A good photographer should bring their own lights, and be prepared to direct the actors in order to get a good shot. It’s a very different situation from photographing a dress rehearsal, in a theater with a real theatrical lights.

I decided to focus the business on production shots instead, and add the option of publicity photos if there was a huge demand. First things first.

A few weeks ago, Red Fern Theatre Company asked if I could do publicity shots for their upcoming show, Good Egg. Though I don’t have my own studio or lights, I agreed because I have worked with the company before (I designed the set for Raised in Captivity in 2009). I was assured that it would be fine without lights.

And it was. We met in the actress’s apartment, and used natural light. It was tricky – a cramped space with a single window – but I think they turned out fairly well.